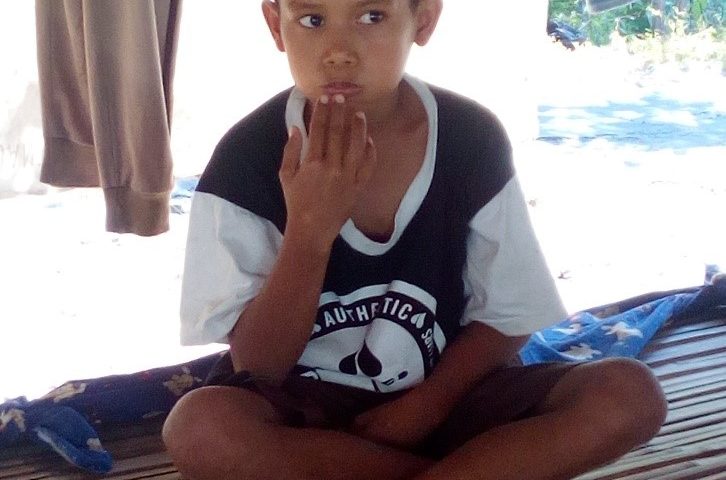 Picture the scene – it’s a typical one found across rural Indonesia.  Under the blazing sun, there’s a group of children playing football, kicking up clouds of dust.  They play in and around groups of chickens and ducks busy looking for food, while a few goats and cows are tied up beneath the shade of trees. The weather is hot, but still cool because this place is right at the foot of Mount Rinjani, on the island of Lombok.

But then something unexpected happens.  Despite it not having rained for days, an adult approaches the group and suddenly yells “flood!”  Even more surprising is the children’s response.  There’s no panic.  Most of them continue with their game. All except one, who just turns and calmly replies “Yes father?”

Because yes – this child’s name is Flood!  Born on Saturday night on 24th December 2004, his birth coincided with a terrible flood which hit the village of Madiyin, East Lombok.  At this time, there was no disaster response program which could help the villagers.  There was no disaster preparedness done before the disaster struck aimed at minimizing causalities and property damage.  There was no early warning system which could give the victims precious time to evacuate. With no electricity even, villagers would learn about the disaster only when it struck – first hearing and then seeing through the dark its terrible approach.  Trees would fall, rocks would come hurtling down the hillsides, crushing whatever was below.

Hundreds of Madiyin villagers ran in panic, looking for a safe place to escape the waters, all running to unspecified destinations without any guidance or knowledge of where was safe.   Two of these people on that night were Inak Eka and her husband Tarmizun.  What set them apart was that Ibu Safaiyah was eight months pregnant on the night of the 24th.  She could not run like the others.

And then suddenly, she felt the pain of childbirth! At first, Tarmizun did not take this seriously, as he knew there was still a whole month to go.  But as the pain got worse and worse, he realised that the horror of the flood had brought on premature labor.  He was able to get his wife onto a motorcycle and to the nearest health post, where that night she gave birth to a son.  In recognition of that night, they named him Mukti Ali Banjir Bandang.

Now fast-forward to 2015.  Banjir Bandang is nine years old but has already lived through two floods of equal devastation as that of his birth – the first in 2012 and the second just one year ago.  Its clear to the community and the government that this is phenomenon is becoming more frequent, and therefore Madayin, together with the two neighboring villages of Dara Kunci and Sugian have been classified as being at the highest risk from natural disasters by the Regional Disaster Management Agency (BPPB).

Due to their level of risk, World Neighbors (WN) together with its local partner LPSDM and the district government of East Lombok, selected the villages of Dara Kunci, Sugian and Madayin to be included in the USAID/OFDA-funded Disaster Risk Reduction in Nusa Tenggara Project, which aims to build resilience, food security and a strong community economy in 35 villages across eastern Indonesia.

One of project’s main strategies in building community resilience is by establishing a community-based disaster management group (KMPB), which for these three villages was done at the start of the project back in March/April 2015.  Since then, these groups have received numerous capacity-building trainings to prepare them for their role in disaster management, including: formulating the structure and selection of the board and members; developing action plans, standard operating procedure and village government regulations on disaster management; policy advocacy; integrating the action plan on climate change adaptation and disaster risk reduction into the RPJMDes (Mid-term Village Development Plan); disaster practice and simulation; and advanced weather prediction and crop cultivation suitable for climate change.  The KMPB is assessed annually using the national government’s Desa Tangguh Bencana (Disaster Resilient Village)[1] guidelines.

For 2 years, the commitment and capacity of the KMPB of these three villages has been increasing, and which was put to the test when this area was hit by flooding in February 2017.

Prior to the disaster, the three KMPBs had already started their preparations. They knew from the rainfall prediction studies which WN together with the Institute Technology Bandung (ITB) had implemented in their areas, that heavy rain was predicted for December 2016, January-March 2017, and which areas had potential for flooding.   So since December, these three KMPB, whose members totaled 150, had started to prepare the early warning tools, evacuation equipment, and maintaining the evacuation route and safe points for assembly. Then on 7th February 2017, the flood first hit Sugian, and four days later the villages of Dara Kunci and Madayin.  Compared to the previous three recent floods – even the one of Banjir Bandand’s birth, this flood was devastating.  It not only causing dikes to collapse; field and farming areas to be destroyed; turning roads into streams; falling trees; houses collapsing and electricity being cut off for five days, but most devastating of all was that the bridge connecting the three villages collapsed – cutting off the villages from the outside world.

But thanks to the preparation and response of the three KMPB, injuries and material losses were greatly reduced from those suffered in previous years.  Early warnings were given to the whole communities using loudspeakers in the mosques and musholla, as well as using tongkek (traditional bamboo instrument). By doing so, the public had sufficient time to protect their valuables and secure their properties. The KMPB then evacuated the communities to their safe points, and continued to monitor the most dangerous areas, keeping people well away.  As in any community, the KMPB had to deal with many different characters, but due to their knowledge they had gained under the disaster management project, they were skilled in convincing people to listen to them, and giving the right information when it was needed to convince everyone to proceed in an orderly manner.

Once the worst of the initial flooding was over, the KMPB then started collecting data on the number of Internally Displaced People (IDPs).  Similarly, the availability of medicines was directly coordinated with the local clinics. All in all, the coordination both before, during and after the flood with the village government, sub-district government, Disaster Risk Reduction Forum, BPBD (Disaster Management Body), Social Office and Indonesia Red Cross was done perfectly.

Each step in the disaster response was done according to the procedures developed by KMPB under the USAID/OFDA project.

In the next few days following the disaster, the KMPB’s together with LPSDM looked for ways to ease the burden of the IDPs, by requesting support from the Government of East Lombok District and WN. WN was able to provide food and water supplies, while the government provided heavy equipment to clear the affected areas.

But the damage caused and outside assistance given are not what will be remembered by Banjir Bandang and his parents, when in coming years they talk about the floods of 2017.  Due to the skills and knowledge which their village’s disaster management group received during the USAID/OFDA Disaster Risk Reduction in Nusa Tenggara project, they will remember how well the whole community responded and worked together to minimize the devastation, and how much more resilient they now are to face future disasters together. 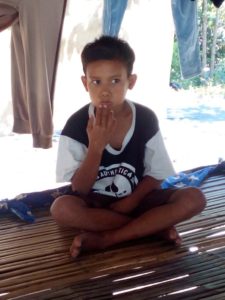 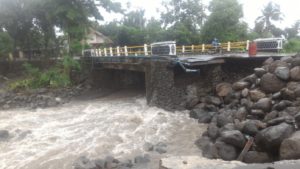 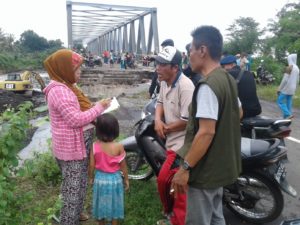 Data Collection on IDPs by KMPB 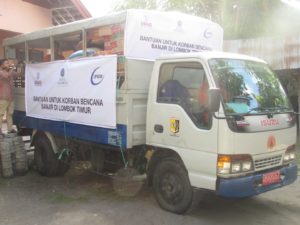 Material Aid based on data provided by KMPB