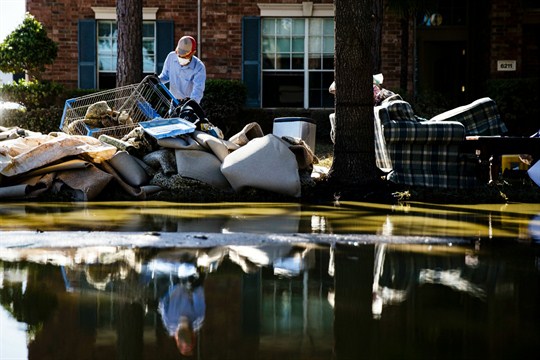 Devastating hurricanes and fires in the United States and the Caribbean since August have demonstrated yet again that extreme weather exacerbated by climate change has created new risks. The suffering and damage caused by this extreme weather has, in turn, created additional new dangers to

Devastating hurricanes and fires in the United States and the Caribbean since August have demonstrated yet again that extreme weather exacerbated by climate change has created new risks. The suffering and damage caused by this extreme weather has, in turn, created additional new dangers to public health.

One of the more worrisome is the spread of disease, especially “vector-borne” diseases. These are diseases transmitted to humans through insect bites, most commonly by mosquitoes, ticks and flies. They include Zika, Lyme, Chikungunya and malaria. In 2015, malaria alone infected over 200 million people and caused about 438,000 deaths worldwide.

According to the World Health Organization, the three key components that determine the prevalence of vector-borne diseases are the number and concentration of animals that host insects, the prevalence of disease-causing parasites and pathogens, and human behavior.

Climate change and all its effects intensify all three components.

First, rising global temperatures lengthen the season and increase the geographic range of disease-carrying insects. As temperatures rise, mosquitoes and other warm-weather insects can move into new regions and higher altitudes. For example, warming is lengthening the season for Zika-carrying mosquitoes.

Since it was discovered in Uganda in 1947, Zika has spread to many parts of the world. Fetuses can acquire the disease from their mothers during pregnancy. The result can be miscarriage and birth defects, including microcephaly, in which babies are born with small heads and underdeveloped brains. Zika transmission has increased in Latin America and has occurred in the southern United States.

Second, increased rainfall, flooding and humidity create more areas for insect breeding and reproduction. Again, Zika is an example. After massive flooding in Louisiana in August 2016, breeding habitats increased, leading to a jump in the number of Aedes mosquitoes that host Zika. This phenomenon is likely to be repeated in Texas, Florida and elsewhere as climate change leads to more coastal flooding.

Third, human migration—with larger numbers of people forced from their communities by drought and other impacts of climate change—exposes people to viruses to which they are not immune. Since many migrants move to cities, they can bring increased risk of disease to overcrowded urban areas. Wide-scale disease outbreaks in large cities could result in the breakdown of social order, with all kinds of negative impacts on security, food distribution, and economic investment and activity.

So what can public and private organizations, including international development groups, do to address the risks of vector-borne diseases?

The World Health Organization and other international groups have increased efforts to work with national governments on enhanced surveillance of insects, in order to establish reliable measurement and tracking systems. This is an immense challenge, given the volume of insects and their ability to “hide” both in the huge amount of global trade and travel and in the flow of increased migration. While solid steps have been taken, governing bodies at all levels will need to invest many more resources to adequately track insects as their animal and plant hosts move around the world.

Effective public health facilities rely on effective governance, including trade rules and relationships—in other words, the substance of sustainable economic and social development.

The World Health Organization and other groups are also addressing another challenge: tracking human diseases. The 2014 Ebola outbreak in West Africa brought to public attention the need to track communicable diseases of all kinds, while raising awareness about the type of public and private infrastructure needed to do so. In essence, effective disease-tracking requires the long-standing and well-funded public health policies and capacities taken for granted in developed countries. Building these systems in developing nations—the work of many international NGOs—will take significant investment for years to come. Public and private organizations need to significantly increase funds dedicated to primary care and public health in the developing world.

Effective public health facilities and services cannot be built and sustained in a vacuum. They require dedicated resources, effective regulation and access to medicines and equipment. These rely on effective governance, including trade rules and relationships—in other words, the substance of sustainable economic and social development.

Most important, the prevention and treatment of vector-borne and other diseases requires that citizens know of and have access to health facilities. While government bodies play a critical role in this, community-based groups are also necessary. One of the more successful examples of governments working together with community-based groups is in the treatment of HIV/AIDS. These groups have played a decisive role in ensuring that antiviral drugs get to those infected with HIV/AIDS in Africa and Asia. They have also played an important role in prevention and outreach, especially in rural areas.

World Neighbors, along with other NGOs, has learned this firsthand through work with community-based groups in rural communities in Kenya, Uganda and Tanzania to deliver HIV/AIDS medications. While the medications were provided through an essential U.S. aid program, the President’s Emergency Plan for AIDS Relief, or PEPFAR, reaching rural communities requires community participation. The centerpiece of this work is voluntary counseling and testing. At the village clinics that World Neighbors and community groups set up, volunteers help educate residents on HIV/AIDS and encourage people to get tested. If positive, those with HIV are encouraged to receive and properly self-administer medications provided through PEPFAR. Clinic volunteers help monitor the use of medications and educate infected persons on how to stay healthy.

The clinics and volunteers help those with HIV organize themselves into groups that hold regular meetings where they discuss a variety of issues, such as healthy and positive living, nutrition and drug management, while acting as support groups for psychological and moral support.

Members are also encouraged to join savings and credit groups, where they are able to obtain loans and initiate or expand their income-generating activities, from handicrafts and the sale of consumable household goods to poultry and dairy goat production, kitchen gardening and farming. This economic element enables Kenyans, Ugandans and Tanzanians with HIV to continue to earn an income and contribute to their families and communities. By earning a living, together with the support groups and the access to medication, the people living with HIV are motivated to stay healthy and adhere to their drug regimens.

These PEPFAR-related initiatives can and should be replicated to help address vector-borne diseases exacerbated by climate change, whether in the Caribbean, which faces a daunting post-hurricane recovery and is dangerously exposed to rising seas, or in South Asia, where more extreme monsoons threaten rapidly expanding populations. Working with community-based groups, these programs not only save lives and prevent disease outbreaks. They also help catalyze economic and social development that helps fund additional public health initiatives.

Kate Schecter is president and CEO of World Neighbors, Inc. an international development organization founded and based in Oklahoma City. She previously worked for the American International Health Alliance and the World Bank.

This article was published in World Politics Review.