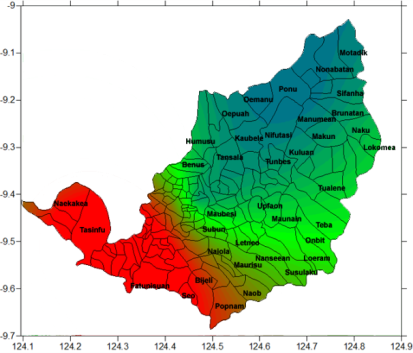 Rural communities in Eastern Indonesia are increasingly suffering from the effects of climate change. Generational knowledge of when, where, and how much rain will fall is becoming more unreliable, leading to critical harvest failures.

To build the resilience of communities to adapt to these evolving conditions, World Neighbors, USAID Indonesia and USAID/OFDA have been cooperating with the Faculty of Science and Earth Technology, Bandung Institute of Technology in conducting rainfall prediction studies. By cross-referencing historical rainfall data from the National Meteorology, Climatology, and Geophysics Agency (BMKG), with data on topographical and agricultural land use supplied by the Department of Agriculture, satellite imagery, as well as local field data on recent rainfall trends and seasonal cropping calendars, rainfall models are created which provide monthly rainfall predictions down to the village level, over a five-year period. Supplied with this information, farmers can determine the type of crop and planting pattern which is best suited to the conditions, while local governments are better able to plan agriculture and infrastructure development projects, and can more accurately predict climate change-related disasters such as floods, landslides, droughts, pests and livestock deaths.

At the end of 2014 and into the beginning of 2015, the seasonal rains arrived very late across Indonesia. In many areas, the hardship this caused was exacerbated by the fact that when they did arrive, it was with an intensity that they were not used to. However in the district of Timor-Tengah-Utara (TTU), in Nusa Tenggara Timor, farmers had the benefit of the rainfall studies which accurately predicted this occurrence. Anticipating this, almost 800 farmers across ten villages adjusted their planting times to anticipate the high rainfall for February. Covering 126 hectares, they planted several different types of crops including sweet potato (Ipomoea batatas), taro (Colocasia esculenta), velvet beans (Mucuna pruriens), cassava (Manihot esculenta) and iles-iles (Amorphophallus muelleri), all of which they knew to be more resistant to high rainfall.

Field reports were very positive, all 800 farmers’ crops survived and gave high yields. Therefore, despite the recent extreme weather patterns negatively impacting harvests across Eastern Indonesia, these farmers will be able to provide their communities with a secure food supply in the months ahead.