We Must Remain Vigilant

“In neighboring villages there continue to be many cases of coronavirus, but thanks to the ongoing work of our disaster management group, Alhamdulillah our village Seruni Mumbul is still a green zone.  But we must remain vigilant.” 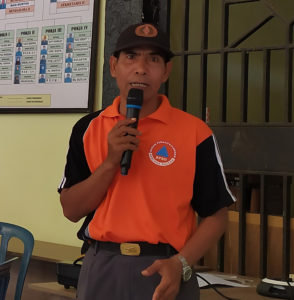 These are the words of Pak Burhanudin, the chairman of Seruni Mumbul Village’s disaster management group and leader of the COVID-19 Task Force. Despite being as weary as the rest of the world with the ongoing restrictions caused by the pandemic, he shows no sign of letting down his guard in keeping his village of 3,400 people safe from the virus.

Having been trained over the previous few years by World Neighbors through the USAID – funded Disaster Risk Reduction for Eastern Indonesia Project, since the start of the outbreak in Indonesia Pak Burhanudin has helped bring together parties from the regional government, private sector, and village community to work together to prevent the spread of the virus.

Pak Burhanudin’s background belies his achievements since he was elected the head of the disaster management group.  During the day, this father of four works in the village government’s office earning a salary of $53 a month, while at night and early morning he is a fisherman, who prior to the pandemic earned roughly $200 a month from selling his catch of crab.  Despite his busy life supporting his family, when World Neighbors first came to Seruni Mumbul Village on the island of Lombok, and began running disaster management and climate change adaption trainings, he showed great enthusiasm to learn and succeed.  When it came to forming a village disaster management group, he was the sole nomination for the position of group chairman. 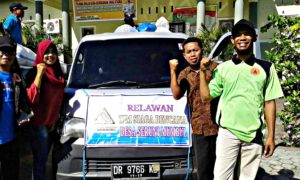 At first, Pak Burhanudin felt nervous in this new leadership role, but he and his team of 56 volunteers were forced into action in August 2018 when a 7.0 earthquake struck the island of Lombok.  Over 560 people were killed and over 410,000 displaced.  Despite having his own home partially destroyed in the earthquake, which forced him and his family to live in a make-shift tent for over four months, when the disaster struck, Pak Burhanudin and his group expertly put into practice what they had been learning from World Neighbors.  As the first responders, they led the evacuation of the village, ensuring at-risk groups such as the elderly and disabled received the support they needed to reach the pre-planned safe point.  They then collected data on everyone affected and recorded the damage to the village, quickly reporting it to the government, fast-tracking much needed emergency assistance.  They established first-aid posts, and provided tents, food and drink supplies, ensuring provisions for those most in need.  The group then acted as the bridge between the village government and East Lombok’s Disaster Management Agency (BPBD) to ensure the longer-term recovery process was conducted properly. 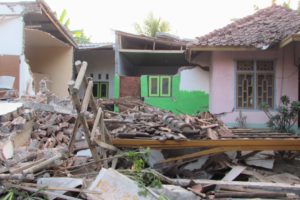 For the people of Lombok, 2019 was a year to rebuild their lives, but Pak Burhanudin knew that he and his team had to stay vigilant, as another disaster could strike at any time.  Throughout the year, they continued to work closely with World Neighbors, increasing their knowledge and practical skills in disaster management.  Throughout eastern Indonesia, World Neighbors, with the support of USAID, provides regular training and mentoring to 127 village-level disaster management groups, similar to the one led by Pak Burhanudin.  Following Indonesia’s national Disaster Resilient Village program (Desa Tangguh), the program increases the groups’ capacities in six key areas – enacting local disaster legalisation; disaster planning; institutional strengthening; self-funding; technical capacity development; and disaster management operations.  During 2019, this capacity-building approach bore fruit when the disaster management group led by Pak Burhanudin was certified as reaching the advanced level of resilience, putting it in the top 5% of Indonesia’s 75,000+ villages in terms of disaster preparedness.

Then, in 2020, the world was struck by a global disaster.  While neighboring villages floundered in their response to the COVID-19 pandemic, and again despite facing severe personal hardships including the loss of 70% of his income due to the difficulties of selling his daily catch during the pandemic, Pak Burhanudin and his team have worked tirelessly to prevent the spread of the virus in his village.  In the words of the Village Secretary Aunur Rofiq: 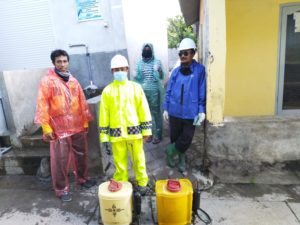 The group has done so much during this pandemic.  I can say that their actions are the implementation of all the various trainings and capacity-building provided by World Neighbors and the East Lombok BPBD.  They are the ones out there preventing the spread of the virus, starting from socializing the behaviors our villagers should be following; raising money for and installing hand washing equipment across our village; spraying disinfectants; and collecting data on residents who have just returned from out of town/abroad.  When it comes to disaster matters, our disaster management group is definitely the quickest to move and provide ideas for solving problems.

One such problem was the initial lack of equipment for the regular cleaning of the mosque, schools and other public buildings.  The group solved this by asking farmers who have their own insecticide equipment for use on their farms to instead convert it to spraying disinfectants.  The group was successful in convincing the village government to pay these farmers a standard daily laborer wage to help alleviate some of the economic burden the farmers face due to the social restrictions currently enforced.  They also addressed the scarcity of masks in the village during the early days of the outbreak by organizing those with sewing skills to make them for the village, again maximizing the resources within their own village rather than asking for external assistance.

Despite the continual, sharp increase in cases throughout Indonesia, which in January hit the one million mark, by putting into practice the disaster management skills he and his team have learned over the previous years, Pak Burhanudin has managed to keep his village of Seruni Mumbul a green zone – completely free of any positive cases since the start of the pandemic. 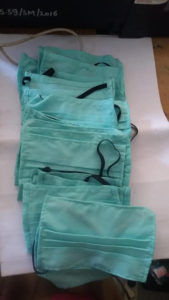 Similar results have been seen across other areas that the World Neighbors program has targeted.  In Central Lombok, the infection rates are four times lower in the 25 program villages when compared to the provincial average, while in Dompu District the program has helped achieve 50% fewer cases than the district average.  In Nagekeo District, there has not been a single case in the 25 program areas, while in East Lombok where Pak Burhanudin lives, he and his fellow disaster management volunteers have helped keep infection rates three times lower than the average across the district.

But for Pak Burhanudin, it is not enough to just rely on him and his team.   He says that what is most important is for the whole village to participate and rely on each other, in order to break the chain of transmission.  It is this principle of self-reliance and being responsible not just for yourself but also for your neighbor, that guarantees Pak Burhanudin will remain vigilant – not only against the current pandemic, but for all future challenges he will face.

By Edd Wright and Made Pukel

This article is made possible by the generous support of the American people through USAID’s Bureau for Humanitarian Assistance.  The contents are the responsibility of World Neighbors and do not necessarily reflect the views of USAID or the United States Government.