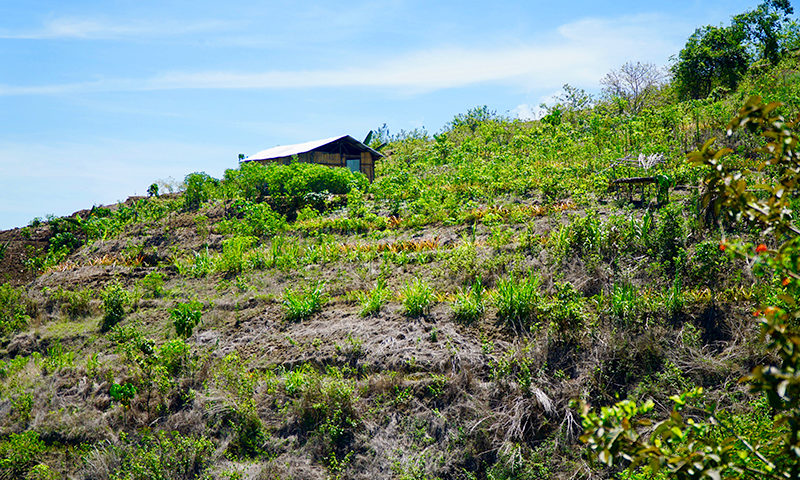 Generally, all farmers in Oecusse, Timor-Leste practice slash and burn to open new farmland. The mountainous, geographic condition of Oecusse means most of the farmland is on steep, sloping land that make the impact from slash and burn even worse, as the top soil washes down and away during the rainy season. It also increases soil degradation and reduces soil fertility, which naturally lead to reduced crop yields.

Mr. Daniel Teme, a member of Moris Foun Community Group in Bairo Oben, Aldeia Oetfo, suco Costa, tells his own experience in switching from his old tradition of slash and burn to permanent farmland development:

My name is Daniel Teme, I am 37 years old. We are six people in my family; myself, my wife and four children.

Before I joined a Farmer Group called Moris Foun, I used to open new farmland to grow rice and maize. I normally opened two new locations of farmland with a size of between 20 to 50 acres for each location, in order to get enough harvest to feed my family in the year ahead. In practice, I slashed then burned all the plants. Once the land was cleared through burning, I then built a fence to keep livestock away. I then started to plant maize, rice and beans during the first period of planting. If the new farmland was previously heavily grown with trees and bush, then the harvest would be good and enough for my family. After the first harvest, I continued to grow cassava and pumpkin. Eventually, after the last crops were harvested, I abandoned this farmland, hoping for the next three to four years it will become bush again, so then I would use it again as farmland. For the next farming season, I opened new farmland again and again for every new farming season. I am aware that preparing the farmland with slash and burn practice needs a lot of energy and time, and even cash to build fences. I sometimes got a loss as the harvest is not always as good as expected. But I didn’t have any other way to survive.

After the establishment of our group, we were given a number of trainings in managing and maintaining permanent farmland. The technologies introduced included contour farming, terracing, hole tillage, line tillage, organic fertilizer, liquid fertilizer, commodity tree nurseries, and appropriate intercropping.

After attending the training and direct practices with all members of the group, my wife and I made the commitment to apply some of the technologies at our farmland. We applied water and soil conservation technologies such as terracing; hole tillage to grow corn and vegetables; intercropping with rice, corn and red beans. The harvest was very successful. From our 40 acre farmland, we harvested 3.5 full drums of corn seeds, 15 bags of paddy (rice) and 10 bags of red beans. The amount of this harvest is almost the same as when the farmland was newly opened – 17 bags of paddy, 4 full drums of maize and 8 bags of red beans.

I am more confident that the crop yield from our permanent farmland will continue to satisfy our needs, and won’t decrease as in the old way. This will be done by me applying water and soil conservation technologies, and adding inputs such as organic fertilizer. My wife and I have also planned to prepare a coffee and orange tree nursery – 300 saplings each, to be grown on this farmland for our retirement and for the future of our four children.