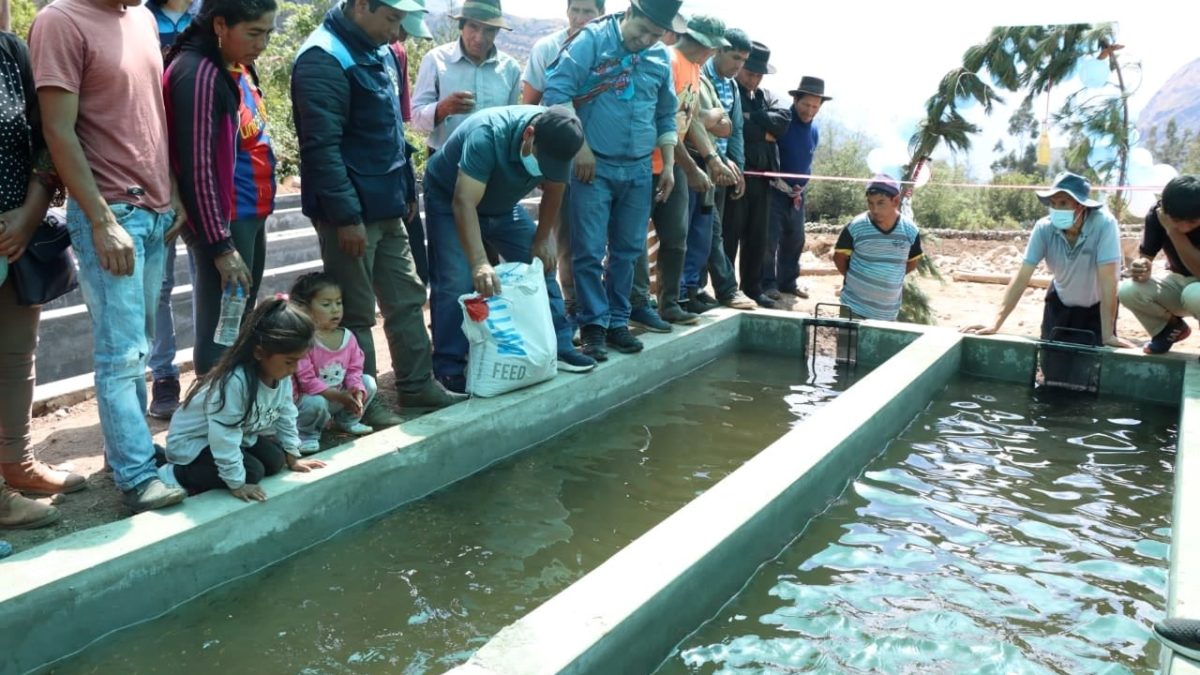 Fish farming has exploded over the past 20 years, especially in Latin America.  But there are serious environmental concerns, including concentrations of fish waste and the use of antibiotics that make their way into oceans. For instance, in areas off Chile, industrial style fish farming has caused dead zones and moved the government to impose new regulations.

The issue isn’t necessarily fish farming.  Like all animal husbandry, it’s how it’s done, and on what scale, which matters. Small scale integrated aquaculture-agriculture in Peru and other countries are making positive contributions to food security and family incomes.

Here’s how they work:

Families or communities capture rainwater. A family or community digs a pond and lines it with plastic or concrete. Using roof gutters and zinc tanks, ponds are filled with captured rainwater. Once filled with water, fish farmers introduce tilapia to the ponds.

The water from fishponds, rich in ammonia from fish waste, falls by gravity into a sump pump. From there, it is piped into a grow bed of 50-gallon plastic barrels cut in half. The barrels contain gravel or volcanic pebbles. The sump tank and bed media oxidize the fish-waste-derived ammonia into nitrites and nitrates for lettuce, spinach, tomatoes and peppers planted in nearby grow beds.

The clean water then sinks into another tank. From that tank, it is pumped back into the fishpond, which periodically receives new rainwater as well.

The fish are fed using a unique protein production technique.

Food waste is mixed with black soldier fly larvae (BSFL) in family and community composters.  The fly lays eggs near the food waste.  The larvae then fall into the organic waste and feed on it.  At the same time, they produce enzymes that kill any harmful bacteria. After a few days, the larvae leave the composters to pupae. These pupae are collected, dehydrated using a solar dehydrator, then squashed and separated into protein (35-40%) and oil (25%).   The protein and oil are then mixed with corn flour to make high-protein fishmeal.

The composted food waste is collected to feed fish and, where they’re raised, chickens.

The integrated, sustainable system, set up with assistance from World Neighbors, enables families to produce enough food, including critical sources of protein. Surplus produce, fish and poultry are sold in local markets.  Given the very low input costs, profit margins are relatively high. Profit is invested to expand output, purchase implements to increase productivity and to improve living conditions.

In addition to Peru, integrated aquaculture-agriculture systems are improving lives in Guatemala, Haiti and other low-income countries.  They are just one low-cost innovation that proves output growth and environmental sustainability can go hand in hand.

Lionel Vigil is Regional Director of Latin America and the Caribbean at World Neighbors.

This article originally appeared on NewsAmerica on November 2, 2022.