Give a person a fish, the proverb goes, and they can feed their family for a day. Teach them to fish, and you have fed them for life. US-based non-governmental organization (NGO) World Neighbors takes the proverb a step further: “Teach that person to farm fish and you have helped them not only to feed their family, but generate enough income to invest in their future and that of their children.”

World Neighbors is helping people in locations as diverse as Peru, Haiti and East Africa to develop fish farming on a small scale – and to do it in a way that minimizes their initial outlay and the impact on the environment. Its projects are examples of the “circular economy” in action that wealthier societies could learn from.

The NGO was founded in 1951 and works around the world with very poor, often remote, rural communities. Chief Executive Kate Schecter says: “The main principle is that we believe people are capable of helping themselves, given the opportunity. Even very poor people, once they have the tools and the knowledge, can save money on their own and invest it in their own wellbeing, on many different levels.”

In Peru, the charity is working with remote communities in the Andes, where the seasons alternate between heavy rain and long dry periods. Lionel Vigil, World Neighbors’ Regional Director for Latin America and the Caribbean, explains: “Traditionally, there are six months of heavy rain and a six-month dry season. With climate change, it’s more like a wet season of only three months, and farmers were asking us about ways
to save water for the community.”

Fish ponds provided an answer, not only for water storage but for a new revenue source. First, rainwater is captured using zinc tanks and plastic gutters, and stored in ponds lined with plastic. The ponds are used to grow freshwater fish – mainly trout, in the Andes – with fingerlings bought from Ayacucho, a city in the region. 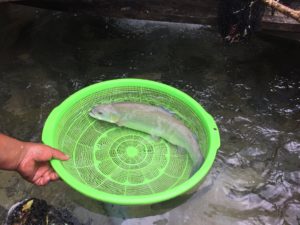 Fishmeal, normally the biggest expense for small-scale fish farmers, is provided using a sustainable process that makes use of food waste. Food leftovers and vegetable leaves are composted with black soldier fly larvae. The larvae feed on the waste and also produce enzymes that kill off harmful bacteria. Once the larvae enter the pupal stage, they are collected, dehydrated – using a solar dehydrator – then crushed and separated into protein and oil. This is mixed with corn flour to make high protein fishmeal.

The composted food waste is used to feed chickens and meanwhile, ammonia-rich waste water from the ponds is piped into a grow bed, with 50-gallon half-barrels containing gravel or volcanic pebbles. The process oxidizes the fish waste into nitrites and nitrates as fertilizer for growing lettuce, spinach, tomatoes and peppers in the grow bed.

Even the fish bones are ground to add calcium to the chickens’ diet. As Lionel Vigil puts it: “It’s circular agriculture.”

The role of World Neighbors is to encourage and inform, for example through “farmer field schools” where people come to exchange ideas and find out about new techniques. 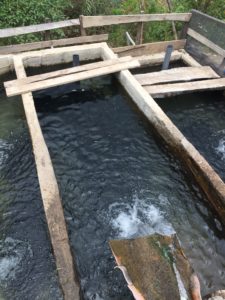 Vigil stresses: “We never say ‘this is what we want you to do’. We train people, look for ideas and gather information.”

This is an important principle for the charity because it means the changes will be more sustainable. Kate Schecter says: “We require that local people do the labor and where possible, that they buy the equipment. We are not going to bring in a bulldozer and dig the pond for them, because next time the bulldozer won’t be there.”

World Neighbors is now looking at how the “circular” concept can be applied to the Amazon region of Peru, a very different environment and one where aquaculture – especially growing tilapia – is already established.

Another species also provides an interesting opportunity – arapaima (arapaima gigas), also known as paiche ,which is very expensive and not affordable for low income families. This is the largest scaled fish in the Amazon region, growing up to three metres in length. Its flesh can be salted and preserved, and it is described as “the cod of the Amazon”, but over-fishing has depleted wild stocks. Farming offers an alternative, and arapaima can be market-ready after just one year. Arapaima fetches a good price in international markets and it has a greater proportion of edible flesh, by total weight, compared with tilapia. Sometimes, tilapia are grown just to feed the larger fish.

Meanwhile in Africa, tilapia is also the most popular farmed fish. World Neighbors has been working with communities in Kenya, for example, where a growing population is putting pressure on wild fish stocks in the lakes.

Small-scale fish farming is also helping to secure economic independence for women in Kenya. Traditionally, gender roles are clearly defined: men fish in the lakes, and women sell the produce. The reliance on fishermen can leave women vulnerable to exploitation, and having their own small pond makes it possible to run their own business. It also means that female fish traders can buy from other women.

Freshwater aquaculture is growing in many African countries, providing not only food for the local population but also an export opportunity for the nation as a whole.

The sustainable approach makes sense for small farmers, but larger producers should take note too, says Kate Schecter: “I think they could learn a lot. One of the main things is the organic nature of it. There are less inputs, it is less expensive and it is much healthier for the environment, and good for the consumer.”