Investing in WASH to Prevent COVID-19

What Helped this Asian Country to Keep Covid-19 Deaths at Zero?

Timor-Leste, also known as East Timor, has seen more than 50 days without new COVID-19 cases and has yet to report a single death, thanks in part to water initiatives designed to increase resilience to outside shocks.

When the first case of COVID-19 was reported on March 21, the government of the tiny Southeast Asian nation shut its borders with Indonesia, from which it gained independence in 2002 after a UN-backed referendum in 1999.

As of mid-June, the former Portuguese colony has only 24 reported cases, out of a total population of 1.3 million people.

Candido Dos Reis Amaral, Director of Public Infrastructure for the regional government of the Timorese exclave of Oecusse – Ambeno, says that despite that success, many private sector companies are losing revenue because of the reduced number of outsiders entering Timor Leste.

“Timor-Leste closely borders Indonesia by land, so that’s why our government very strictly applied all the protocol and procedures recommended by WHO,” he said, “And the public is very disciplined during this period to apply physical and social distancing.”

As the pandemic progressed, other measures were also implemented.

Fidelis Magalhães, Timor-Leste’s Minister of Legislative Reforms and Parliamentary Affairs and acting Minister Coordinator of Economic Affairs, writing for the Diplomat said the national government has not only authorized a cash transfer of $100 to households with monthly income of under $500, they are also funding $5 million in subsidies for agricultural machinery, fuel, technology, and inputs to keep food supply moving in the country.

An NGO working with Amaral in his part of Timor-Leste credits part of the country’s COVID-19 success to governments and international development organizations helping Timor-Leste’s government increase resilience to outside shocks, especially climate change, in recent years.

One big benefit to these years of work has been an increased uptake in hand-washing.

Since the program started in 2015 hand-washing rates have skyrocketed via community-based education programs and the installation of simple hand washing devices called “tippy taps,” according to World Neighbors statistics.

These are water containers mounted on sticks or poles and a foot pedal causes it to tip and release enough water for hand-washing.

Edd Wright, Southeast Asia regional director for World Neighbors says the “tippy tap” component has been in place since the early days of the project.

“It is simple technology which would have already been known by our NGO partners and the communities from before the project started,” he said, “What ICRO did was to raise awareness on the importance of good personal hygiene and sanitation, which triggered the increased uptake of communities building and using the tippy-taps.”

Wright says this technology is especially important in areas of very low water accessibility, which is why its suitable for many of the communities the NGO works with in the often-dry nation of Timor-Leste.

Amaral says the regional government and World Neighbors have collaborated on other infrastructure, including the construction of; ongoing maintenance of; and management plan for a healthy clean water system facility.

“World Neighbors as a partner made a very helpful contribution especially helping advocacy and building awareness in the use of water resources and how to sustainably protect them,” Amaral said. 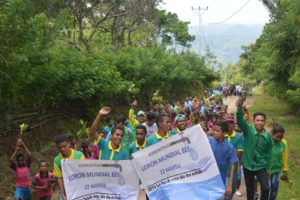 Timor-Leste is far from the only place in the developing world where hand-washing and water security are crucial to the response to COVID-19.

Turtle conservationist and health advocate Eric Quayson has been teaching fishermen hand-washing protocol on a beach in western Ghana.

Like Timor-Leste, Ghana moved fast compared to some industrialized countries in announcing travel restrictions. As of mid-June Ghana had only about 8000 reported active COVID-19 cases out of a population of around 30 million people.

This article originally appeared on forbes.com on June 21, 2020