The growing popularity of guinea pig meat in high-end restaurants in Peru is helping to usher in the return of a traditional, and environmentally friendly, industry led by women.

Top chefs in Peru, Ecuador and Colombia have brought traditional cuy meat back in popularity with roasted, curried and even sweetened versions appearing on menus.

The squeamishness of foreign visitors facing a deep-fried dish of cuy chactado, had also been reflected in sectors of Peruvian society where the aesthetics of eating a rodent were problematic.

But now that is changing, and the growing demand has given Andean governments and charities an opportunity to provide rural women with training on sustainable guinea pig farming and help with issues of poverty, malnutrition and equality.

Organically farmed giant guinea pigs, bred for meat and twice the size of the creatures used as pets, are being marketed as an alternative source of protein to poultry and a healthier alternative to red meat.

In Peru a program is being run by World Neighbors (WN), a US group working to alleviate poverty in some of the most isolated villages of Asia, Africa and Latin America. Aimed at women with limited resources, it teaches skills that will improve equality within families and help women win financial independence.

“Cuy farming is seen by Peruvians as an environmentally friendly alternative step towards reducing their impact on the environment. It optimises the use of land, they are fast-breeding and do not require much feeding to be ready for consumption,” said Lionel Vigil, WN’s director.

“Unlike livestock, [guinea pigs] do not generate deforestation, or produce large quantities of excreta like cattle, the main producers of greenhouse gas such as methane.”

Daniel Huamaní Bedoya, from Peru’s general directorate of livestock, said: “It is the empowerment of rural women to play a leading role in breeding as well as being a livestock activity closely linked to family farming that allows the development of the population.”

Guinea pigs have been pets since they were first brought to Europe, but for more than 5,000 years they have fed rural communities in Peru, Ecuador, Bolivia and Colombia, countries deeply and frequently affected by malnutrition and unemployment.

The cuy has featured prominently in traditional festivals; famously, a cooked guinea pig lies paws up in the celebrated 1753 painting of the Last Supper by Marcos Zapata in the Cathedral Basilica in Cusco.

Mariela Lizarme Llocclla, a cuy farmer, originally reared cattle. It used to take her two years to rear a calf, a year to raise a pig and seven months for a chicken. But with an initial investment of 100 soles she bought two cuy and in only three months she had animals to sell at the market. She uses the animals’ manure to fertilise pastures used to grow alfalfa, which is used to feed the cuy. 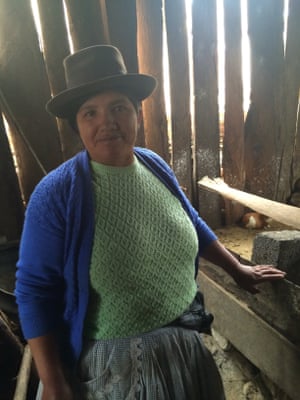 “I had my cow, it gave me good milk, [I made] cheese and sold its calves. Raising cattle took much more time, as the forage was far from my home, I had almost no time for my family or other activities. I did not value breeding cuy but, since I participated in the workshops, I have been motivated. It generates permanent income, people know I have cuy for sale, so visit me every week to buy,” said Llocclla, who is now hoping her daughter will join the business.

Materials needed for cages and sheds, constructed from adobe, a brick composite made of earth, water and straw or dung, can be sourced locally. Maintaining the health of cuy is vital; breeders avoid the need for antibiotics or agro-veterinary products by feeding them fresh food and water and regularly cleaning the animals and their sheds.

Research by Peru’s national health institute has shown that cuy has greater nutritional value than poultry, beef or lamb.

But of the 20 breeds of guinea pig that exist in Peru, only three are bred for meat. The other breeds are exported as pets. Cuy reared for pets weigh an average of 750g, while breeds reared for consumption, such as Andino and Inti, are a hefty 1,520g. The Peruvian breed has been known to weigh in at up to 3kg.

“It’s an animal that handles cold climates better than hot ones,” said Vigil. “I do not rule out their production in countries where they are considered pets, but there needs to be improvements in marketing and presentation. For example, they should be offered without the head and legs, so that in supermarkets it is viewed as organic healthy meat instead of a slaughtered pet.”

A 2019 report by Peru’s ministry of agriculture revealed a growing international demand for cuy meat, with an 18% growth in sales between 1994 and 2018. Prices have also increased from $5 to $13 per kilo over the same period. Peru remains the leading producer, followed by Ecuador, with Andean expats in the US the main export market (99%).

“Some Peruvian companies export bagged and frozen cuy to the US and Japan,” said Vigil.

“They have had serious problems trying to convince customs officials that their products are fit, healthy and do not represent any danger to public health. This is despite companies having met export and import standards in both countries and having permits issued by the US Department of Agriculture.”