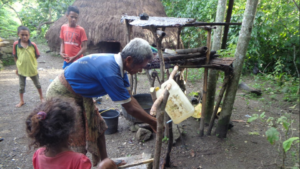 By Randy Mulyanto and Nicola Smith

Almost half of Timor-Leste’s more than 1.2 million population still lives in extreme poverty with little access to healthcare and high malnutrition rates, but the tiny nation, the youngest democracy in Asia, has avoided a coronavirus catastrophe and hopes it can set an example of best practice across the region.

As of July 8, Timor has kept its Covid-19 case count down to just 24, with no deaths – an achievement Odete da Silva Viegas, health services delivery director general at the country’s health ministry, attributed to the government calling an early state of emergency, locking down the borders and introducing strict quarantine measures.

The country, which only gained formal independence in 2002, quickly realised that its developing healthcare system and limited intensive care facilities, could not cope with a large influx of patients.

Instead, after its first case was confirmed on March 21, it moved fast to contain the virus by suspending school and non-essential public activities, and by expanding a web-based surveillance system to help track the spread of Covid-19.

Despite having one of the highest levels of stunting in the world, and a high prevalence of tobacco abuse and non-communicable disease, such as chronic obstructive pulmonary disease, the country’s Covid-19 strategy appears to have worked.

Dr Viegas also credited Timor-Leste’s early success to the fact that the government had “acted so swiftly”.

Health workers and emergency responders in the country were “rapidly trained” in case management and infection control, quarantine facilities quickly erected and testing introduced, with the national laboratory in the capital, Dili, able to conduct hundreds of tests a day.

The highest levels of the Timorese government and religious organisations – the country is predominantly Catholic – were also committed to controlling the disease, she added.

Timor’s population had also played a vital role in beating back the virus, she added.

“It is wonderful to see a high degree of compliance with prevention measures such as mandatory masking and physical distancing in communal settings and restrictions on travel and mobility,” Dr Viegas said.

“Our border communities and village chiefs help with community surveillance by providing immediate information about illegal entries along our porous borders with Indonesia so that health officials can take timely action.”

Maria Carmen Alianca Ximenes Pereira, 38, a hotel employee in Dili told the Telegraph that when the first case was announced, people “got scared” and immediately stayed home, used masks and washed their hands regularly.

One of the first things she noticed was that the roads “immediately turned quiet” as motorcycle riders were banned from carrying passengers and private cars could only carry three people – limited to main family members.

Many Dili residents returned to their home villages to sit out the pandemic. “There was no one in Dili, just a few people left. Perhaps that is why we do not have [many cases of] coronavirus,” said Ms Pereira.

Some 70 percent of Timor-Leste’s population lives in rural areas in scattered villages, isolated from each other by mountainous terrain and poor road conditions.

The distance between villages may have slowed the spread, said Edd Wright, who oversees projects run by development charity World Neighbours in Timor-Leste.

Initiatives like the Increasing Community Resilience Programme, funded by USAID and run by World Neighbours, in the municipality of Oecusse, were also valuable in countering the coronavirus by focusing on hand-washing and water management, he said.

“In rural communities where we work, water is really scarce. When they do have it, people prioritise consumption and cooking, so hand washing is not a natural thing that they do,” he said.

“Our focus is on increasing access to water, making sure the rural communities all get their water from natural springs,” he added.

“If we are able to increase access to water, and people have more water then we always try and implement a sanitation aspect as well. We run health information campaigns about the importance of hand-washing.”

“We try to set up a basic infrastructure, like these tippy taps which are really good tools in water stressed areas. It’s the first step up on the sanitation ladder to be able to easily wash your hands using a small amount of water,” said Mr Wright.

Dr Viegas said the government was aware that its success so far may be fragile, particularly as the country borders Indonesia, which now has more than 68,000 cases.

“We are constantly aware, alert and vigilant about new importations of coronavirus into Timor-Leste. It is a matter of ‘when’ not ‘if’. And we are preparing accordingly,” she said.

“We continue to improve the quantity and quality of our isolation and quarantine facilities. We are strengthening our laboratory testing capacity and surveillance capability. As restrictions loosen, we will tighten surveillance. There will be no let up in our ‘test, treat, isolate, trace and quarantine’ policy.”

This article originally appeared on telegraph.co.uk on July 9, 2020.