Getting Back on Track with Global Poverty Reduction

Agriculture in the time of COVID-19 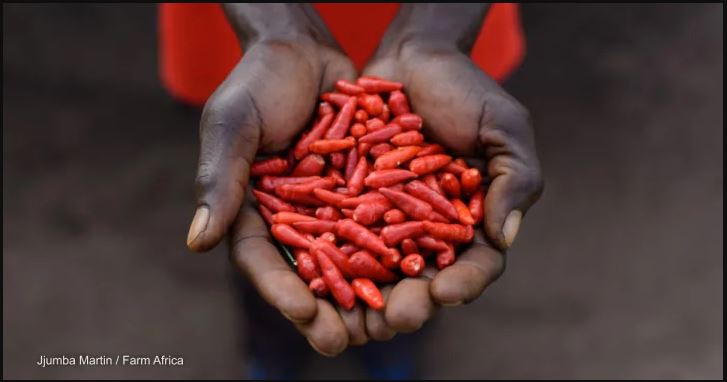 The effects of COVID-19 have been felt in almost every sector, and agriculture is no different.

Social distancing requirements and travel restrictions have prevented farmers from sowing their crops, leading to labor disruption, and wreaking havoc on supply chains. As a result, there’s been a 30% rise in global food prices since the start of 2020 and a decline in the household incomes of some smallholder farmers, which make up more than 60% of Africa’s population.

Although the picture has been bleak, some say the pandemic has brought a wave of innovation that could transform the sector in the long run.

For example, Collins Marita, director of research and impact assessment at Mercy Corps AgriFin program — which develops digital solutions to help smallholder farmers in eight African countries — said there had been more appetite among farmers for digitization. “They have realized now it’s the way to go,” he said.

A report by the Organisation for Economic Co-operation and Development also called the pandemic an opportunity “to not just respond effectively to the current crisis, but to roll back distortive, inefficient and environmentally harmful support, thereby freeing up financial resources for investments in a more productive, sustainable and resilient food system able to meet new challenges.”

In some places this is already happening with organizations integrating new technology and different ways of working in a bid to strengthen agriculture systems and food production.

According to Marita, 37% of smallholder farmers Mercy Corps surveyed said their use of digital tools had increased during the pandemic. As a result, the project expanded its activities during the pandemic to provide information through WhatsApp, as well as TV, SMS, interactive voice response, and Facebook groups on the virus as well as floods and desert locusts. “[We wanted] to see if we could assist our farmers to have some level of mitigation measures against these environmental shocks,” Marita said.

In Kenya and Ethiopia, Mercy Corps partnered with Turn.io to provide farmers with a hotline via WhatsApp to report locusts sightings and receive real-time customized public health messaging. Concerns farmers have are different from the public, Marita said, explaining that at the start of the pandemic many farmers had questions around COVID-19 transmission between animals and humans and the app allowed them to address these.

Going forward, Marita said the plan is to continue to promote digital climate-smart agriculture because of its ability to help smallholder families at an individual and community level while building resilience to future shocks. “What we need is a variety of digital networks of solutions that link all the players in the industry — including buyers, financial institutions, the public and private sector, farmer groups, and innovators.”

“We looked for local radio stations and those having specifically agriculture programs and we fit into the existing programs,” Esanyu said. Training sessions on chili, agronomy, post-harvest handling, and market linkage that they’d usually provide in-person instead went out on the airwaves, he added. Chili farmers could then call in with comments and questions, and some would then travel to the local office to pick up seeds to begin their own chili production, Esanyu said.

The programs also communicated the current market price of chilies helping to prevent extortion, Esanyu said, explaining that some may charge higher than necessary prices.

The change of format for the information dissemination meant the project exceeded the reach it had set out to achieve, and more people were able to learn and engage in chili production to generate an income. “We worked basically in one district, but through the radio, we were able to reach seven other districts,” Esanyu said. As a result, Farm Africa will likely continue utilizing radio beyond the pandemic, he added.

Greenwell Matchaya, senior international researcher at the International Water Management Institute South Africa, said research he had done — which has yet to be published — revealed that the price of certain foods had dropped because of a lack of demand due to market closures and travel restrictions. This has meant a loss of income for smallholder farmers who, as a result, may not be able to reinvest in the agriculture sector. In the long-term, this could affect the food supply, Matchaya said.

Finding a way around market closures and ensuring delivery is one way to keep the food supply moving and farmers in business.

Instead of selling the chilies grown at the markets, Farm Africa has pivoted to coordinate a team of chili agents to buy and collect the chilies from the farmers and deliver them to people’s homes. This ensures people are still able to buy and sell despite markets being closed.

Esanyu said this delivery method will also continue beyond the pandemic to help elderly farmers who struggle to make it to the market. “The most vulnerable farmers are protected because the real buyer is going to their homes and not someone making differences [over prices],” he said, explaining that often buyers might offer too low a price than the current market value.

All of this has taught Farm Africa to be more flexible in adapting to the needs of farmers, Esanyu said.

For example, World Neighbors — which works in five African countries, as well as others in Asia and Latin America — encourages the formation of agricultural self-help groups that sit under an umbrella organization. This engenders solidarity and interdependencies among the smallholder farmers, pastoralists, Indigenous peoples, faith-based institutions, and environmentalists, Macoloo said. So when the pandemic hit, they were already organized in a way that allowed them to share food, he explained.

“We also encouraged them to have kitchen gardens next to their homes where they grew vegetables using wastewater from kitchens,” Macoloo said, meaning that individuals had food to fall back on and share.

The way we practice agriculture needs to be revised for the longer-term, Macoloo said. Explaining that policies that work in one part of the world don’t always translate well in another, COVID-19 may mean countries in Africa review their agriculture and food policies and decentralize food systems, Macoloo said.

“Although the world has become a village, we cannot globalize most of these policies, we can only have some structure in our frameworks, but these frameworks have to be domesticated,” he said. “[Centralization] has shown that when there is a lockdown, distribution, movement, and transportation gets messed up, and therefore you may have plenty at point A but people starving in point C.”

In addition, smallholder farmers must be empowered to produce locally and encouraged to store at subnational levels, Macoloo advised.

This article originally appeared on Devex.com on July 27, 2021